Customers’ experience using mobile phones is more important to a company, no matter what you believe. There is no time to suffer from bad user experiences, regardless of whether they are consumers or employees. Before we dive into the fundamentals of native app development or hybrid mobile applications, one specific aspect of mobile needs to be aware of. At the beginning stage of mobile app development, what worries them the most is confusion about which approach to development to pick among Native and Hybrid, as both are unique and possess distinct characteristics. Before making a major decision regarding mobile apps, app developers must know the difference between native app and hybrid app. 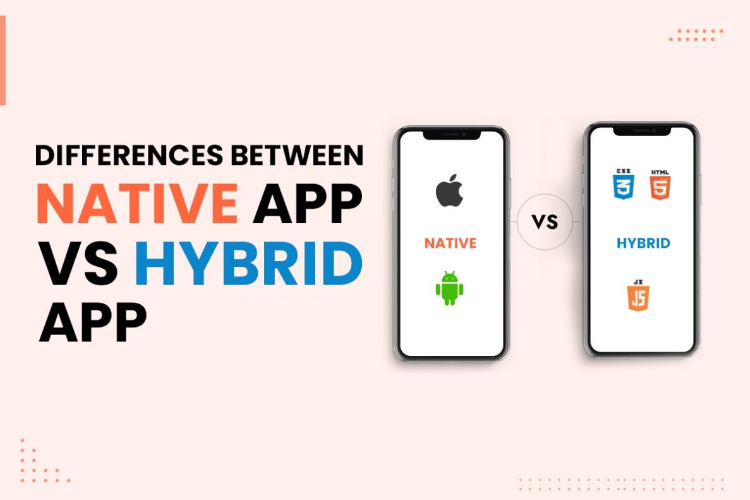 Experience for users is more efficient with native applications. Graphics are downloaded with the application, and the speed of downloading is not required to be considered when creating. The graphics used in the hybrid do not have an attractive user interface. Native apps are restricted, but it is improving.

2. Native apps may have some issues compared to hybrid apps

What is a hybrid platform? The native apps are screened via the App Store for review, and then they are developed. They are tested several times before being uploaded. This ensures they are free of bugs and provide users with more options.

The hybrid app will connect more users across many platforms faster and more effortlessly than a native application. The shared codebase is available to overall operating systems (quicker development). It is also possible to develop the app quickly and with no requirement to go through an approval process. It is an open web platform. Therefore, there is no need to wait to be approved by the App Store.

An app that is native can be challenging to maintain and support after it has been downloaded. Multiple code bases need to be maintained. For the hybrid app, users will have the most current version. There are two code bases, and the app owners are in charge.

In the native app, customers expect certain features and patterns of design. For instance, the zooming-in feature and the location where the return button should be kept when using native apps. The apps must be designed to give the user convenience and ease to use.

Because native apps are specifically designed for smartphones, they look and feel like they belong to your phone, not as hybrid apps. The developers consider the comfort level of the intended users and create applications based on their preferences.

It’s much more difficult to maintain two distinct applications within one code base than to keep the two separate ones. There are a lot of hidden expenses associated when you use Hybrid app development that makes the software compatible with every OS variation and device.

For instance, local highlights in mobiles need to be revealed using designs by designers. The needed modules aren’t available to support the OS devices and adaptations being marketed.

In this way, the price of crossbreed applications outweighs the prestige of using natural highlights within the native application.

Furthermore, to implement the crossbreed method, designers must remain in place until an engineer outside the company offers the half-and-half instrument to help create an OS-like framework. OS highlights.

Many people underestimate the dangers of mixed applications, where every application layer offers an extension to attacks. Half-and-half applications must include a second layer that adjusts the local code to accommodate the varying local highlights.

The layer is shocking, as it shares an external location, and any user can not scrutinize its code. This is why every flexible local component that the half-and-half applications can use requires an application module. All code that enters the application should be inspected for any possible threats.

This means that half-breed improvement of applications is an expensive venture, but not more than an expensive one. Since there are no concerns in native applications, it’s much more efficient to choose the native method.

If the app’s flexibility is what one wants to have with a small budget, then the most suitable option is to use hybrid apps. Through one-time development, all requirements will be fulfilled.

This is perhaps the most important reason for native apps to be developed. Using the native approach, app developers can develop an app in a technically sound way and theoretically be able to make it compatible across all devices and browsers running the specific OS.

HTML 5 applications work for every working framework. When an update arises, one update is enough for each other devices and can be accessed rapidly.

Customers, for the major part, have unreal expectations for apps. Consequently, it takes some time to let them leave the application when they realize they are not involved in it. In a flash, they search for an alternative program that will give them the best experience on mobile app.

The functionality of native applications is much better than cross-platform applications that give customers top-of-the-line interaction. Native applications run faster and are more open to clients with various needs since they are built on amazing examples from every step.

Furthermore, they can access additional gadget sensors such as GPS, which makes the experience more advanced. There are a variety of movements that the JavaScript arbiter has recorded to create a Hybrid application. Still, in the meantime, they cannot be as quick and with the same power as an application nearby.

Hope you understand the difference between Native App and Hybrid App. Native app may be fast and simple to design and manage, the other approach will likely result in a less-than-excellent user experience and sub-par performance.

Android is a distinct platform, as are iOS and Android. iOS has two different mobile operating systems with different UX and distinct expectations. So, a “one-size-fits-all solution ” may not be a good idea.

To conclude all contradictions, choosing native apps is a great way to save both time and money and guarantee the highest quality for apps due to the safe methods used in developing native apps and the ability to adjust to changing mobile technology.

https://otwosoft.com
My name is Sasha Mil working as a professional content writer for Otwosoft.com, a software development company in UK. I have written almost for all sorts of writing areas e.g. creative, technical, web content, academic, and so on. If you desire to move towards the world of creativeness with me do contact me. I’ll be very happy for working with you.