A technology survey report published on W3Techs revealed that PHP is used by almost 77% of all websites. This means that being a PHP web framework certainly empowers Laravel with advanced web development tools. Another report of W3Techs highlighted the popular websites that used Node.JS for their site which include Twitter, Adobe, Spotify, and ESPN.

So there’s no doubt in it that both Laravel and Node.JS are quite popular in the programming world. What we do know is that both these technologies are known for back-end development. Each of them has its unique set of features and is capable of catering to the growing demands of the web industry.

But the real dilemma comes when you can go with only one. So how do you know which one is fit for what? The answer to this lies in knowing about the fundamentals of both technologies along with a feature-based comparison.

Drawing a detailed comparison of Laravel vs NodeJS can help developers know which is going to work for what and the capability to meet the criteria of the site, app, or system in question. So let’s begin.

Laravel’s official site proclaims it to be a framework for web artisans. With significant features like a blade template engine, a strong queue system, built-in support for authentication, hassle-free integration with the Mail system, WebSockets, and automated testing, Laravel has proven itself worthy of the claim.

It has an expressive syntax and is based on the Model-View-Controller pattern which removes the requirement to write HTML codes. For someone who is relatively new to the web world and is looking for an uncomplicated beginning to web development, Laravel looks like a suitable framework.

But there are a few more exclusive traits that make Laravel stand out from other back-end development and PHP frameworks.

Cross-platform, open source and robust, this JavaScript runtime environment has gained recognition for its outstanding features and capabilities to build highly scalable applications. It runs on Chrome’s V8 engine and strives to unify web development with a single coding language rather than having separated languages for client-side and server-side.

Node.JS serves as an excellent choice for networking applications (owing to its scalability), real-time communication apps, and browser games. The runtime environment is influenced by Python’s Twisted and Event Machine of Ruby, only that it models a better structure.

It is single-threaded and object-oriented and can handle requests better. But some classic features that impress developers are:

Laravel vs NodeJS: A Feature-Based Comparison

Now that we have the basic info on both the back-end technologies, let’s draw a feature-based comparison to know the differences between Laravel vs NodeJS. 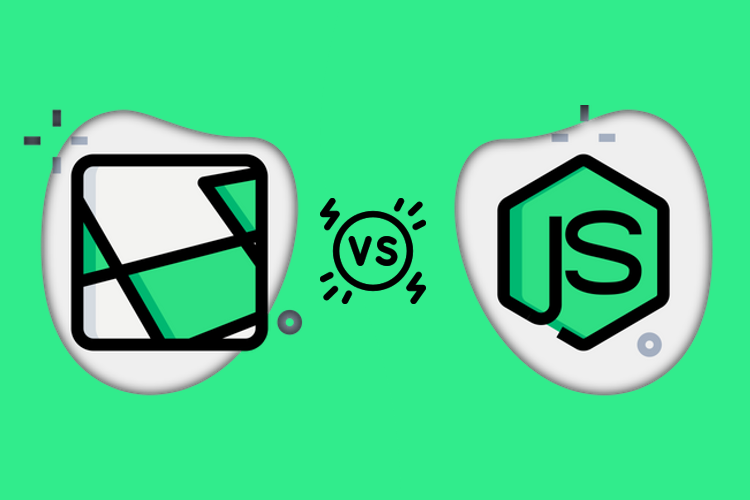 While Laravel is a proper PHP-based web framework, NodeJS is a runtime environment built on Chrome’s V8 engine and meant to execute JavaScript code outside the web browser.

Laravel follows a Model-View-Controller architectural pattern while Node.JS is event-driven. This means that while Node can produce, detect and react to events, Laravel is used for the development of user interfaces by dividing programming logic into three interconnected elements.

When it comes to security, Laravel gains an upper hand as it provides its own system for the protection of web applications. Laravel uses a ‘Bcrypt Hashing algorithm’ for the creation and representation of the encrypted password.

Now Node.JS offers developers several security modules and packages under npm, but they are not as robust as Laravel.

Both Laravel and Node offer cross-platform compatibility. But Node happens to have an advantage over Laravel. That’s because besides being supported by major operating systems like Windows, macOS, and Linux, it is also supported by various renowned cloud platforms (as seen earlier).

Laravel integrates well with front-end libraries. When paired with Inertia and Livewire, it can be used for full-stack development. Node.JS does not provide any such features for integration.

Laravel is good to go for the development of an app that works with MariaDB and MySQL. Node.JS on the other is ideal to work with MongoDB and Express.JS.

When it comes to performance, Node.JS ranks higher because of its ability to handle concurrent requests with ease. That’s the reason why it is the preferred choice for the development of communication, entertainment and networking apps.

Laravel, on the other hand, lacks the sheer flexibility of Node (only by a small gap though). Its MVC architecture makes it suitable for the development of shopping and educational apps.

Proper application of any web development platform or framework requires mastery over it. It is obvious that Laravel requires sound knowledge of PHP while Node that of JavaScript, but as compared to Node, Laravel’s learning curve is steeper.

Using Laravel also requires knowledge of HTML and CSS. So for users looking to go for Laravel development, it might be tougher to find a seasoned developer.

Community support makes for a crucial point as a strong community ensures finding feasible solutions to your coding problems. Although both Laravel and Node.JS thrive on the contributions of an ever-growing community, Node boasts of a larger community owing to its easy learning curve and wide usability.

Things to Consider Before the Final Selection

As back-end development platforms, both Laravel and Node.JS have their own perks. While Laravel is good on security and is good for apps that need to go big on user data, Node.JS is for apps that get more user requests. But, with pros come the cons too.

So before making your final selection, one should consider the cons too, and here are a few of them.

The web world is an ever-scaling world. There have been many programming languages, development frameworks, and tools that emerged, evolved, thrived, and suddenly vanished. It needs strong support, continual evolution, a wide range of usability, and of course updated versions to keep the technology up and running.

Node and Laravel have kept up with the changing pace and continue to rein their development genres. However, if there’s one thing we all know, it’s that development in either of the platforms will require industry-trained and experienced developers.

How Can a Maths Tutor Help You Ahead of Exams?