PHP vs Python: Which Should You Choose for Web Development?

Choosing between these two becomes a little challenging. Despite the fact that many websites are created in PHP, Python has also gained a lot of popularity in recent years. Let’s understand the difference between PHP vs Python programming languages and which is better to choose for web development. 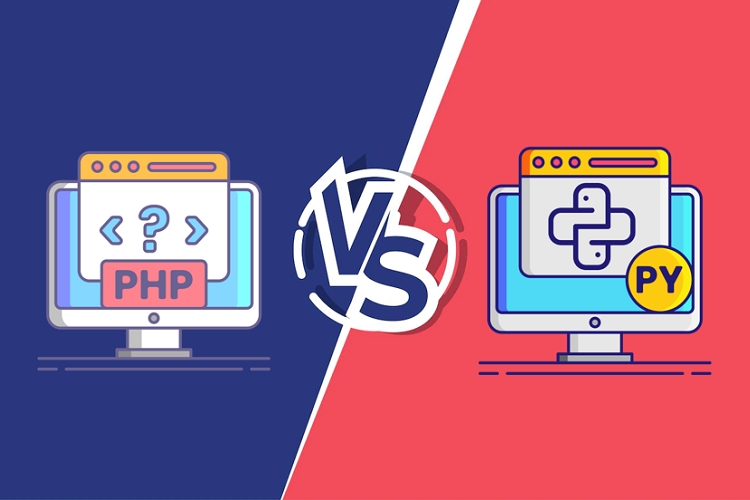 Web developers should use the programming language PHP, or Hypertext Preprocessor. It is a server scripting language that is open-source and used to build interactive, user-driven web sites. With certain exceptional capabilities, plugins, libraries, and add-ons, PHP is the language of choice for maximizing the enormous community support and functions.

In 1995, Rasmus Lerdorf created PHP, also known as Personal Home Page. Following that, it was given the moniker PHP-Hypertext Preprocessor. For the backend development of online applications, PHP is great since it is supported by almost all web browsers.

PHP powers almost all of the websites on the internet. It is a versatile, practical, and quick language that can handle databases, session tracking, and dynamic content on HTML web pages.

An open-source programming language called Python focuses on object-oriented programming ideas. In 1991, Guido Van Rossum created this language. It offers high-level, simple syntax and is one of the most widely used languages right now.

Python is one of the languages that people seek and adore the most, according to the Stack Overflow Survey 2021. With their apps, many businesses employ Python globally. You may use it to create web apps since it functions as a scripting language for web browsers.

When Should You Use PHP?

PHP is a popular server-side programming language used by developers. Following are some situations where PHP may be used:

When Should You Use Python?

The popularity of the Python programming language is growing nowadays. Here are some scenarios in which choosing Python is a wise decision:

PHP is a strong programming language, thus here are some justifications for our selection:

Python is today’s technology since it has so many benefits. Several benefits of using Python for web development include the following:

You receive a thorough rundown of the languages’ characteristics, advantages, and disadvantages. Here is a comparison between PHP vs Python based on several factors!

A detailed comparison will enable you to choose the language that will produce the greatest results for your web development efforts, as well as the one that is easiest and most efficient to deal with.

The communities are extremely supportive of PHP and Python. Since PHP has been used for developing web applications for a while, it has a sizable developer community that can provide support right away.

Here, Python and PHP are very similar. The community support for Python is quite good because there are many Python developers that are continually creating Python programs. So, there isn’t a standout winner among them.

These days, web applications with machine learning skills are in high demand. Python also has a significant ML component. Python has excellent machine learning libraries including Pandas, Tensorflow, Theano, and Scikit-learn. These libraries combine flawless integration with a web framework with speed, dependability, and uniqueness.

Python is an open-source, portable, and flexible programming language that is easy to use. Programming with Python syntax is also straightforward. PHP is more difficult to grasp while writing than Python.

Because it is only used to build dynamic HTML web pages, PHP is not a normal programming language. Python is therefore more productive than PHP. PHP is thus outperformed by Python in terms of usability.

Python has a vast selection of external libraries, packages, and modules that may help you complete projects more quickly. One of the well-known web frameworks developed in Python is Django, for instance. It uses the MVC pattern to let developers create program quickly while utilizing a significant deal of reusability and separation of responsibilities.

Additionally, PHP is proud of its toolset, which includes frameworks and libraries. As an instance, Laravel is the most well-known PHP framework that supports the MVC pattern and is pre-packaged with a variety of beneficial features for web development, such as routing, authentication, and other features.

Both Python and PHP provide powerful and appealing web development frameworks. Many huge firms employ the web frameworks that PHP has to offer. For instance, established frameworks with a sizable community like Symfony and Laravel. PHP facilitates web development in this way.

Additionally, Python offers several exceptional frameworks. The two most well-known Python-based web frameworks are Flask and Django. These are quick, quick to load, simple to use, and secure. Django is typically preferred by developers over PHP-based frameworks because of its simple setup and rapid development.

Python utilizes Pip as a package management tool. Thanks to Pip, creating a Python app is quick, easy, and compliant with all development standards.

PHP’s library management is less effective than Python’s. Python offers a larger selection of libraries and useful tools for making the building of web apps simpler. Thus, Python is the winner in this scenario.

Businesses like Python because of its security features. To help safeguard the apps from various security dangers, Django, for instance, has a variety of built-in security features. Several government agencies also utilize Python as a top-secret hacking tool.

Despite the fact that its vibrant community has assisted in resolving the majority of the security concerns, PHP is less safe than Python. Therefore, at this moment, Python defeats PHP.

8. Management of the Environment

Python has historically been the best programming language for controlling environments. Its Virtualenv feature makes it easy to install many language versions and switch between them instantly.

Python can outperform PHP in this area. There is VirtPHP, a PHP equivalent, although it is archived and not entirely updated. As a result, developers prefer to utilize PHP and containers. This conflict clearly favors Python.

Without a doubt, learning Python is simpler. It’s incredibly easy to learn this all-purpose programming language. Choosing a programming course for a novice is simple. Python apps are easier and quicker to create than those written in other languages.

But unlike standalone, straightforward applications, PHP is designed for complex web projects. It is definitely not a general-purpose language. As a result, learning PHP requires more time than learning Python.

Python comes with a built-in debugger called PDB. It employs several debugging techniques. PDB has dynamic typing, which enables developers to work without having to explicitly state their intentions at the start of a program.

Additionally, PHP has a package called XDebug that programmers may use to fix issues and inspect their code for errors. However, PHP development is substantially slower in detecting and eliminating issues. As a result, it has several security issues.

Despite the fact that both PHP and Python perform incredibly well for web programming, Python beats PHP in a number of key areas. However, this does not require you to select Python and ignore PHP. Excellent programming languages for building web apps include both Python and PHP.

Finally, while you are developing your web apps, it mostly depends on the requirements of your project as well as your PHP or Python skills, experience, and expertise.

https://www.sparkouttech.com
Pryanka is a Digital Marketing Executive at Sparkout Tech Solutions. She designs marketing strategies with the intention of using high-quality content to educate and engage audiences. Her specialties include social media marketing specialist, SEO, and she works closely with B2B and B2C businesses, providing digital marketing strategies that gain social media attention and increase your search engine visibility.