Mobile Apps vs Web Apps: Which is the Better Option?

Mobile apps and Web apps are a concept existing since the inception of smartphones. However, still, it is quite confusing for a few people to distinguish between the both. Thus, we are targeting the issue and explaining the difference between both concepts in simple terms.

To put it simply, mobile apps are the traditional way of using different features on smartphones. You need to install the app to use its features. On the other hand, Web Apps are more flexible and do not require any installation to work. 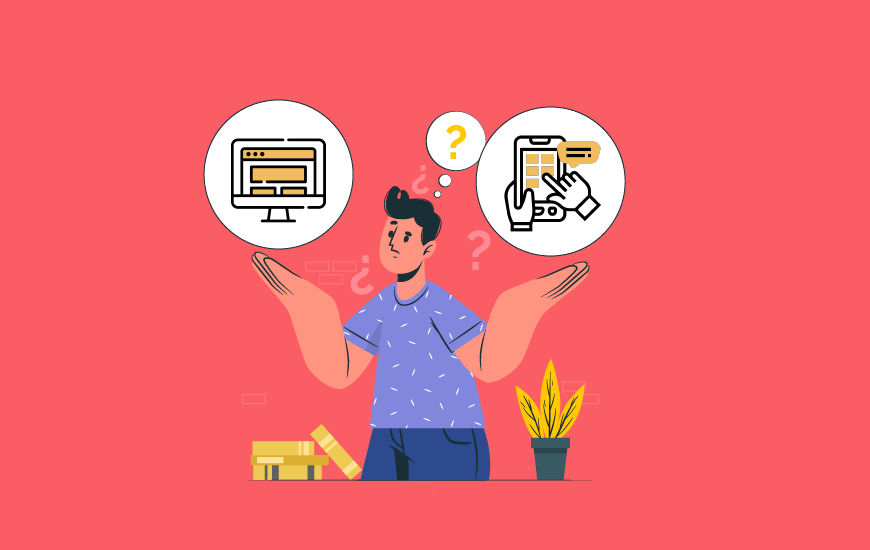 Now, without further ado, let’s discuss a few other differences between Mobile Apps vs Web Apps!

One of the basic differences between mobile apps and web apps is the internet requirement. Many mobile apps are designed to provide their features even without an internet connection. For instance- Google maps lets you download your preferred maps online so you never get lost.

Mobile apps are capable of offering more features as they do not require an internet connection. Thus, with the one-time download, the user can use these features as long as they want. In the case of Web Apps, the limitation is again, the internet connection. Due to being dependent on data usage, users might want to get their tasks done without having to spend a lot of data. However, it also depends on the target market and the average internet speed of the area. For instance- the Internet is faster in the US compared to India. Thus, the US market has more exposure for extra features in Web Apps.

In any digital business, be it based on the website or mobile apps, loading time directly impacts the user experience. Thus, You should hire an expert to improve loading time and try to keep it as minimal as possible. In the case of mobile apps, it is possible to make them load faster compared to Web Apps all the time.

However, the loading speed of mobile apps is also dependent on the smartphone OS version, hardware configuration, and more. But compared to Web Apps, as they require the fastest internet connection always to load faster, mobile apps have a better loading time on average.

You can minimize delays in loading content by choosing the best CDN service provider for your app.

Compared to Web Apps, mobile apps lead the market in this segment as well. Due to many factors like internet, speed, and more- mobile apps are being used more than Web Apps. The reason, as we discussed earlier, is simple- the internet. Not every country has cheap data packs for them to use Web Apps all the time. But mobile apps are able to serve countries with cheap internet prices, and expensive internet rates.

Pros and Cons of the Mobile apps vs Web Apps

Now, before winding up the blog for good, let’s summarize the pros and cons of both types of mobile apps in short.

In the time that we live in, mobile apps have more exposure to growth in the market compared to Web Apps due to their reach, expandability, and features. Thus, especially for new businesses, mobile apps are a better alternative. It will not only result in growing the popularity of the brand, but mobile apps can also help in offering services and products to more people. Now, even when there are more than three billion mobile users in the world- not everyone has stable access to the internet.

If you’re worried about your teen’s phone screen time and possible plans, spy apps can help out. Even if most of your child’s conversations occur through different text messaging apps, you can know for sure what they’re up to or potentially exposed to by monitoring them and use this app to read someone text messages.

https://www.mobileappdaily.com
Jason Camaya loves carrying his camera wherever he goes. When he doesn’t click pictures, Jason loves to write, play video games, and procrastinate. He has been writing for MobileAppDaily for quite some time now, and as talented as he gets, he is giving tough competition to his fellow writers. He has been featured on many websites and blogs.