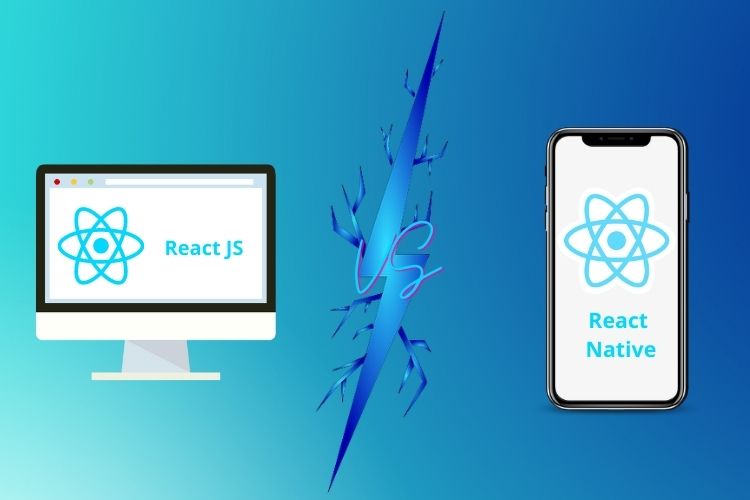 What is React JS?

As we know what is React JS, so let us discuss its features of the React JS:

Hence, you can engage with React JS development company to create your web application at a low cost.

What is React Native?

React Native is an open-source technology created by Facebook to satisfy its rising mobile demands. It is a great way to create native mobile apps with reusable components that can run in JavaScript on platforms including Windows, Android, and iOS. React Native, for example, uses React JS for the base abstraction; only the library components are different. In fact, if you want to create an app for both platforms, get mobile app development services from a well-known agency.

Above, we have to define what React native is? So, let us explain the benefits of using React Native.

The primary difference between React JS vs React Native is that React JS may run on any platform, but React Native cannot. Many features distinguish React JS from React Native. For starters, developers and programmers can use React JS to create a high-performance UI as their own JS library. You can develop the complete framework with React Native, regardless of whether you’re using iOS or Android.

React JS provides the best security when compared to React Native. Because of its mobile nature, React Native’s security can be lacking.

Another significant distinction between React and React Native is that React JS allows for more eminent animation at higher levels than React Native. It’s done mostly with React JS and CSS, whereas React Native relies on API to generate animation. Nonetheless, both are used in web development and mobile app development since they are both adaptable and offer reusable components that boost functionality at the same time.

React Native also performs better in mobile apps and regular calculations and computations. On the other hand, React JS is better at handling more complex computations. And it is used in a wide range of applications.

Because it is only a library at its core, React JS has a lot of constraints. React JS is a JavaScript library that enables professionals to create an engaging and high-performing User Interface Layer. In contrast, React Native is a framework rather than a language library. Moreover, the web application built with React JS renders HTML in UI, whereas React native uses JSX for rendering.

The components differ between React and React Native. React JS is a web DOM base, but React Native is a derivation of it. To put it another way, the components are distinct. While the flow appears to be identical, there are some functional distinctions.

A primary distinction between the two is how the code is rendered. React JS allows you to render code from the DOM, but React Native allows you to use APIs in mobile apps. Styling approaches differ as well. You may use CSS with React JS and stylesheets with React Native, for example, and it also affects how you use animation. Meanwhile, React JS will provide developers with more safe and accessible choices for creating high-performing animations.

If a business owners want its web app to be built with a responsive, high-performing UI, React JS is the best choice. And, if the need is to provide a mobile app with a native feeling, React native is good.

React Navigation is powered directly by React and is fully integrated with JavaScript, making it perfect for web application loading. React Native is a little trickier because it uses its own React native framework to browse mobile apps and provide important mobile performance.

After reading this article, you will have a better understanding of the differences between React JS vs React Native and the benefits. Are you still undecided about the best framework to use? While both frameworks have a lot to offer, it’s important to remember that React JS and React Native are essential focal points for web and app development.

You will be bombarded with upgrades and updates in an environment where technology is evolving and can be a pain. However, you cannot expect everything to run smoothly. All you need is a sufficient quantity of ability and knowledge to get started. In the end, after you’ve decided what kind of app you want to build, picking between React JS and React Native should be a piece of cake.

https://www.brihaspatitech.com
Hitesh Chauhan is a compelling content contributor who works with the prominent React JS web development company, The Brihaspati Infotech. He has an attentive mindset and definite interests in advanced technologies and marketing tactics that encourage him in writing content that readers greet. His eagerness toward multiple heads makes his pieces more audible and engaging.